Each Year in the UK an Average of 15 Mine Shafts Collapse.

Are You Aware of the Risks of Historical Coal Mining and Mining Activity and How It Can Impact Your Existing Site or Proposed Development?

Each Year in the UK an Average of 15 Mine Shafts Collapse. In March 2020 the BBC reported “Hole in garden ‘as old mine workings collapse'”  Every year we see dramatic headlines where buildings have been destroyed or roads collapse due to collapsed mine shafts. 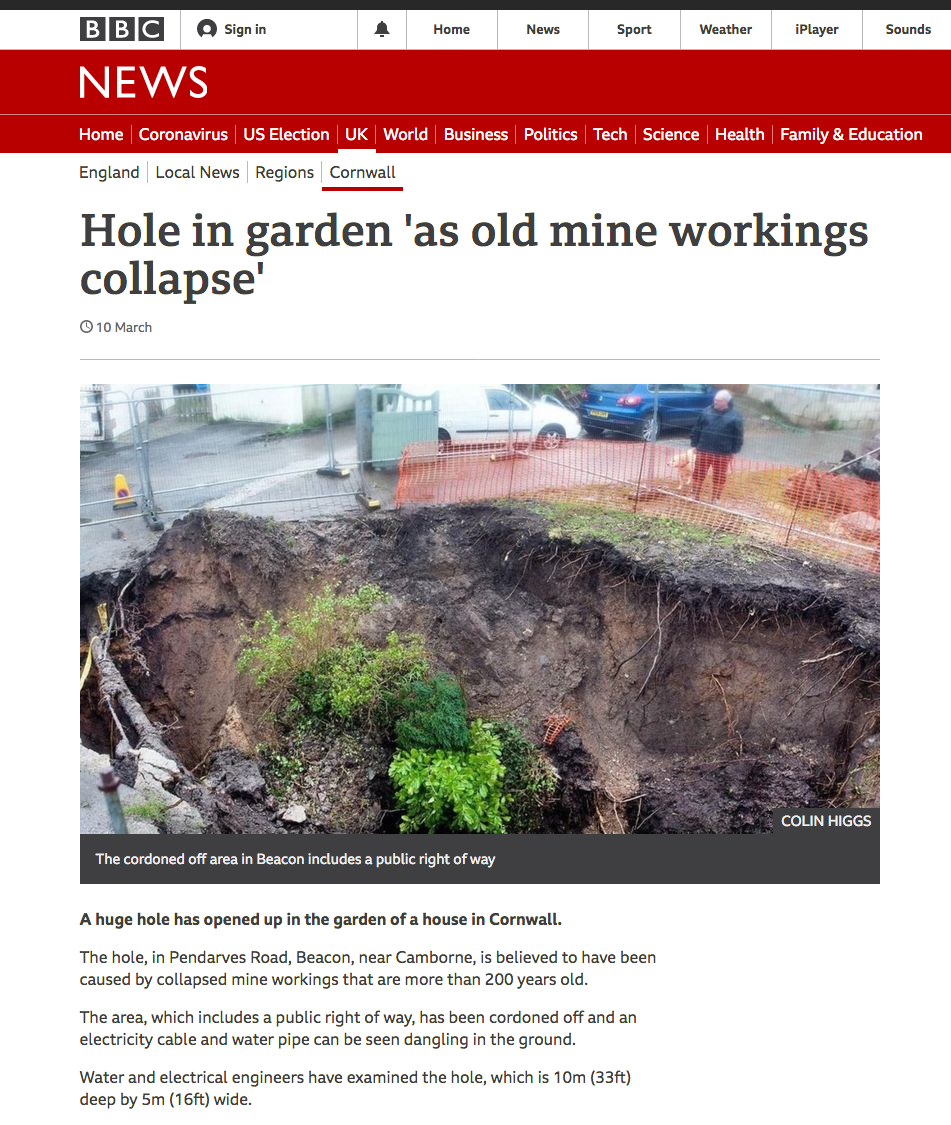 A Coal Mining Risk Assessment’s aim is to identify site specific coal mining risks and set out the proposed mitigation strategy to show that the site can be made safe and stable for the development being proposed.

Earth Environmental & Geotechnical assist developers at any stage of a project, from coal mining risk assessments and site investigations through to remediation works (e.g. drill and grouting).  Make sure your development doesn’t hit the headlines for the wrong reasons.

Underground mining in the UK dates back as far as Neolithic times and over the millennia the UK has been shaped by its mining activities.  From flint extraction across the chalk plateau of Norfolk and the Downs to fracking near Blackpool, we have a long history of extracting valuable commodities. But whilst extracting the vast array of resources have been vital to the success of Great Britain. It has also left hidden risks beneath our ever growing residential and commercial developments.

Every week, somewhere in the UK there is a claim made to rectify the physical damages caused by mining activity.  Around £40 million of damages has been paid out to properties in the last decade – and that is just in coal mining areas.

The total number of abandoned mine entries in the UK has been estimated at 405,000.  There have been over 35 minerals extracted from beneath our nation’s surface, some of which are of national and occasionally global significance.

Although much of this extraction has ceased, the historical legacy of coal mining and mining in the UK has a continuing impact.

Over the centuries as mines were no longer productive, they were closed or abandoned. Some mineshafts were just left, some were capped with wood, backfilled with mine waste, rubble and soil. Over the centuries the wood has rotted, and underground water eroded the soil and back fill. This degradation can lead to dramatic and devastating collapse with dramatic News headlines.

Sinkhole in Gateshead causes A1 to collapse into old mine shaft https://www.chroniclelive.co.uk/news/north-east-news/sinkhole-gateshead-causes-a1-collapse-11526902

Resulting in disruption at best, and fatalities at worst.

The UK Coal Authority record some 150,000 coal mine shafts and other mine entrances and it is thought that there are many more but are unrecorded or “missing”. They estimate that there are 25,000 square kilometres of abandoned underground coal mine workings and tunnels in the Britain. The number of shafts probably double when other non-coal mine entries made for the tin, copper, lead, iron, clay industries etc. are included. There are 130,000 properties within 20m of a mine entry so the legacy of mining has a huge impact on our future developments.

Mining and mineral extraction reaches every corner of every county in the UK. There are mine shafts, shallow underground workings and surface quarries littering our land. Some of these mines are listed but many lie hidden beneath agricultural and previously-developed land.

But with our increasing population and industrial growth, residential and commercial property is developing into all areas. Therefore developers need to be fully aware of the risks and what lies beneath their development land. Subsidence, collapse and differential settlement linked with mineral extraction can all cause devastating damage to land and property. Mineshaft and mine working collapses happen each year in the UK and in areas of the country that were never associated, at least to the unaware, with mining.

If you are planning a development, whether it is referred to as Development High Risk Area or not it is prudent to have a thorough understanding of all risks involved.

For Coal Mining Risk Assessment CMRA or advice on land development and historical mining – Call Earth Environmental & Geotechnical now to discuss your development and how we can help Tel: 0161 975 6088

Without a Coal Mining Risk Assessment (CMRA) your planning application may not get approval and your development could be delayed.

Earth Environmental & Geotechnical can help identify if your site falls within a High Risk area and needs a CMRA or whether your development is exempt.

CALL US NOW. We are happy to discuss any questions you may about CMRA – How it affects you and how we can help with your development.