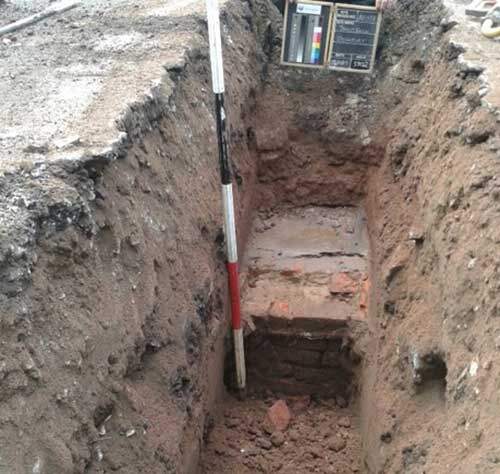 Stockport MBC were undertaking a feasibility study for a new link road between the M60 and the A6 in Stockport.  It was intended for the proposed new road to cut into sloping ground below one of the arches of the Stockport Viaduct.  A disused railway tunnel was present in this location which would have to be removed.

As part of the study, a ground investigation was undertaken to pinpoint the exact location of the railway tunnel and to assess the depth and nature of the existing foundations to the Stockport Viaduct.  The investigation also obtained soil and rock geotechnical parameters for the design of retaining walls to support the road through cut slopes.  Geoenvironmental information was also included for a human health risk assessment.

The railway tunnel was located with trial pits and trenches excavated at locations selected using historical maps.  The tunnel was around 1m deep and constructed of brick with a bitumen seal. 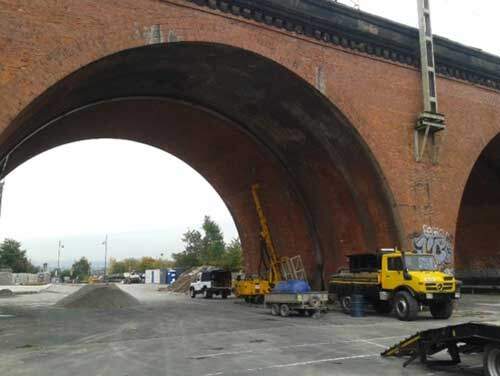 The railway tunnel was located with trial pits and trenches excavated

The foundations to the existing railway viaduct were investigated via rotary coring at an angle of 20˚, with the drilling rig set up under the arches of the bridge.

The sandstone bedrock was photographed, described in accordance with BS5930 2015,  sampled and tested in the laboratory to provide a complete picture of the ground conditions and potential risks to the scheme.

An interpretative report was produced detailing: 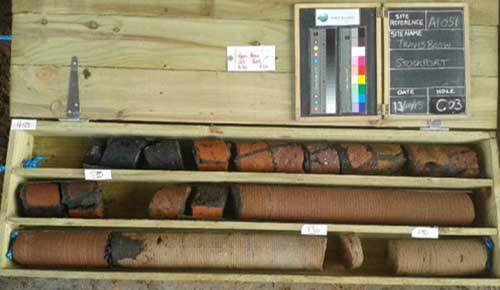